Thanks to Mohan Pradhan and Mariyapillai Jayakananthan for developing this documentation.

This example document explains how to set up a single VuFind instance to retrieve records from multiple Koha instances, allowing all of the records to be searched in a single place. It also sets up the MultiILS authentication method, allowing users to access their VuFind accounts with the same credentials they use in Koha.

This is not meant to supersede the more general information found on the MultiBackend Driver and Koha Indexing pages.

As of this writing, VuFind includes three different drivers for Koha:

This document demonstrates setting up communication with three different Koha instances, each using a different ILS driver. While this scenario could occur in a real-world situation if multiple instances had different Koha versions or security requirements, this is mainly done to demonstrate the three different driver configuration methods and to highlight how MultiBackend configuration works. If you have control over your setup, you should prefer the KohaRest driver when possible.

Also note that some of the older ILS drivers may be deprecated or removed in future versions of VuFind.

Before you can load records into VuFind, you must first extract them from Koha.

To retrieve records from Koha, there are two possible approaches:

Each approach is described in a section below; you can choose one or the other but do not need to do both. Option I (OAI-PMH) is recommended, as it makes automatic, incremental updating much easier.

Option I: OAI-PMH Configuration in Koha

In Koha, OAI-PMH should be enabled by visiting by Home/Administration/Systems preference/Web services.

You can check whether the service is enabled by visiting {Koha OPAC URL}/cgi-bin/koha/oai.pl?verb=Identify in your web browser. If the service is turned on, you should see something similar to this: 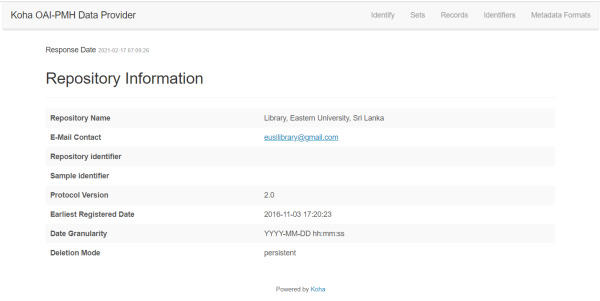 Before harvesting data from Koha to VuFind, you should click the Records button then click metadata[format marc21], and you should see something similar to the following: 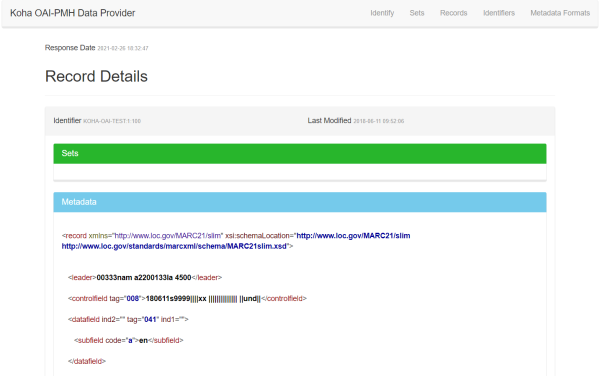 As described above, this example assumes you are setting up VuFind to communicate with three distinct instances of Koha. We will call them Library1, Library2 and Library3 for this example. You can extend this to include additional instances by simply repeating the steps extra times using different instance names.

Several configuration files need to be copied into your local settings directory in order to set up all aspects of record loading and ILS communication.

Depending on whether you chose option I or option II to export records from Koha in step 1, you may need to take different actions to load those records into VuFind now. Choose the appropriate option below; note that option I offers greater automation potential.

Screenshots of the Outcome of the Configuration